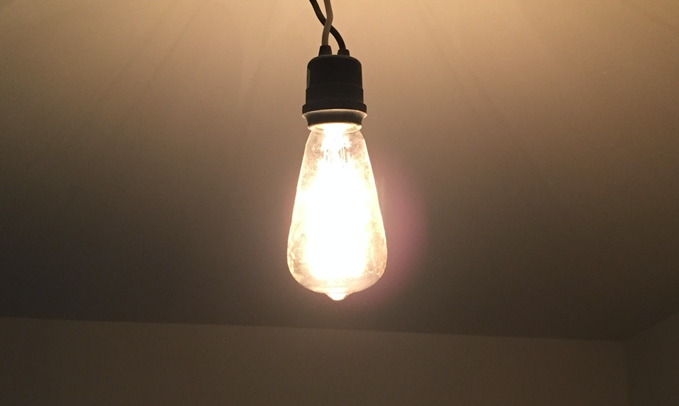 We’re now at the point where we’re frustratingly close to seeing the end of this whole thing, which is still better than a few weeks ago when we were frustratingly unable to imagine wrapping this up.

The biggest thing this week: first sign of cabinets coming into the house:

It’s really obvious now that the cabinets are the gating factor for finishing up here — the countertop people don’t want to talk to us until the boxes are in place, and we can’t have the appliances installed. If 100% of the cabinets were in place right now, we could wrap things up in 2 weeks.

We had been told that these were going in last week, then this week, then half of this wall to come this next week.

X your fingers for us, plz.

While that was happening, all of the trim work is finished now, and major advances with the painting — kitchen, stairwell, and dining room are now complete: Also, some electrical work in the kitchen — the bases for the lights are all in place now, which will look like this: (Remember back in Week 1 we talked about the idea here: we’re modeling the look of the kitchen after the Edison Labs in West Orange, NJ, which are now a National Park and you should really go.) The Edison Museum,
not open to the public
Its haunted towers rise into the clouds above it
Folks drive in from out of town
To gaze in amazement when they see it

A sad realization this week, though: I had wanted to use Edison filament bulbs in the kitchen (the low wattage isn’t a problem because the architect specified a grid of a dozen lights in there). After buying some different versions (incandescent and the new LED ones) and trying them in the actual room at night, the combination of the orange glow from the lights and the blue on the walls is really unappetizing. Unless I can find some that are tuned to a much higher color temperature, we need to come up with a plan B here.

Through the iron bars,
I see the Black Maria
Revolving slowly on its platform
In the topmost tower, a light burns dim
A coiling filament glowing within